Join Your Friends for a Networking Event

All attendees of the Eastern Gas Compression Roundtable are invited to attend the Monday evening Welcome Reception, sponsored by Solar Turbines. Enjoy an evening of networking and fun at this informal reception which will include light hors’ d’oeurves and camaraderie with your colleagues and friends. This event is included in your EGCR registration. Attendees will receive 2 free drink tickets for beer or wine and a cash bar will be available.

Dress is casual. Cost is free to EGCR attendees.

Join your friends and associates on the greens at the 2018 EGCR Golf Event. 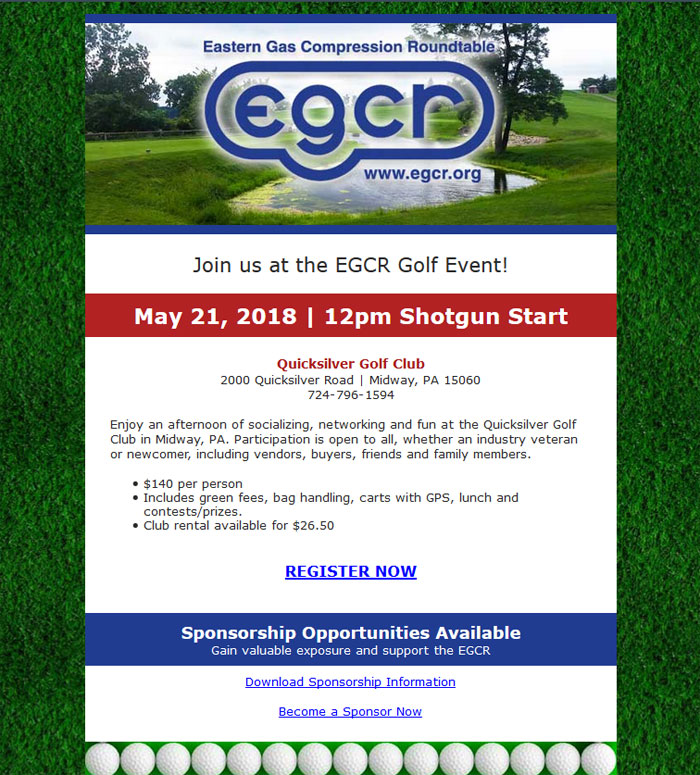 The EGCR is proud to announce the 2018 Keynote Speaker

What Got Us Here … WILL Get Us There! 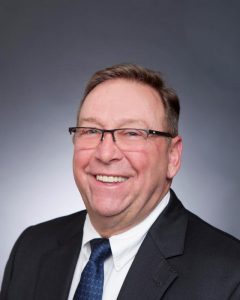 Like many in the industry, Cliff Baker worked his way through the ranks at EQT Corporation. During the 80s mowing grass, rebuilding compressor engines, painting…. you name it, he did it! By 1991 he was elevated to Team Leader over various field assets, pipelines and compressor stations. Recognizing that education could fast track his proven leadership abilities, Baker enrolled in Duquesne University where he graduated Cum Laude in 1996 and went on to earn an MSLBE in 2004. A year later he was advanced to Manager of Gas Control and experienced a series of promotions and increased responsibility, to the position of Director of Commercial Operations then Vice President of the same division. He was then promoted to Sr. Vice President of Gas Management and Transportation. Currently he holds the position of Senior Vice President of Midstream Field Operations. It is evident Cliff gained the respect of his peers on every level but he also brings a wealth of hands-on experience and career success that inspires positive performance from his team members.

Make your EGCR lodging reservations directly with the hotel

We have been made aware that exhibitors and attendees of the EGCR are receiving phone calls (and possibly emails) from a company or companies inquiring if you have made reservations for the EGCR and/or offering to assist you with reservations.

**EGCR has not contracted with a third party to assist you with hotel reservations.

You can read more about this practice here:
http://www.meetings-conventions.com/News/Features/Beware-of-Room-Poachers/

It is important to remember that ALL HOTEL RESERVATIONS for the EGCR should be handled by you, individually with the hotel, and that the EGCR has not contracted with a third-party to contact you to make reservations on our behalf.

The Role of Natural Gas in the North American Energy Equation

As a result of technological advances, natural gas has become the most abundant and economical energy source available within the world today.

The largest recoverable reserves are located in the Marcellus and Utica Shales in the Northeast U.S. that includes Eastern Ohio and most of Pennsylvania and West Virginia. Natural gas will play a major role in supplying both domestic and international needs for the next 100 years. However, environmentalists’ unrealistic calls for leaving the gas in the ground – “to reduce the rate of climate change” – threaten the future of the oil & gas industry as well as the security and economic well-being of the U.S.

This presentation will provide a brief overview of the important role that natural gas is expected to play in the U.S., its strategic importance, and the potential impact of the rapidly growing energy demands of developing countries by 2030. It will further discuss how all energy sources, including renewables, are expected to develop and what their relative merits are in terms of strategic importance, economic impact and sustainability. Before leading ACI from 2004 through March of 2013, he spent 32 years in various engineering, management and executive positions with Cooper Cameron Corporation including Director of Engineering, General Manager, and VP – Product Development.

We’ve just been made aware that exhibitors and attendees of the EGCR are receiving phone calls (and possibly emails) from a company called Convention Housing Bureau, inquiring if you have made reservations for the 2017 EGCR and/or offering to assist you with reservations.

Please be aware that the EGCR has not contracted with a third party to assist you with hotel reservations. Companies such as this are frequently referred to as ‘hotel poachers’ in the meetings industry because they attempt to get you to make a reservation using their services and often will either not make the reservation at all or not make the reservation at your requested hotel. After you’ve given them your credit card number, it is a difficult process to receive a refund and may involve onerous penalties to cancel.

You can read more about this practice here:  http://www.meetings-conventions.com/News/Features/Beware-of-Room-Poachers/

It is important to remember that ALL HOTEL RESERVATIONS for the EGCR should be handled by you, individually, and that the EGCR has not contracted with a third-party to contact you to make reservations on our behalf.

We have been made aware of another company called Exposition Housing using the same practices.